Sixth in a series of stories about local Waurika businesses. Shop local and invest your tax dollars where we live, work and play.

The story of Eck Drug & Gift in Waurika is a retail success story that is best told by going back a generation to Eck Drug in Healdton, Oklahoma. That’s where Dana Landon “Biff” Eck was born and where the original Eck Drug began. When asked where his nickname Biff started, he replied, “There was a man in Ringling, a family friend, who was named Dana Biff. I was named Dana Landon Eck, but have always been called Dana or Biff. “Biff just became part of my name.”

“My Dad, Kenneth, started out in high school as a pharmacist apprentice in Healdton. He went to World War II as a pharmacy mate. He came home from the war and eventually went to Pharmacy School at Southwestern State College in Weatherford. He graduated in 1950 with the highest GPA in school history. A record that wasn’t broken until the 1970’s when they changed the grading scale,” Biff stated. “After graduation he returned to Healdton and went to work as a Pharmacist at Taylor Drug, which later became Taylor-Eck Drug then Johnson-Eck and finally Eck Drug. When Taylor sold his share of Taylor-Eck Drug to Kenneth Eck, he came to Waurika and worked as a Pharmacist for Grundy Drug.

“In 1978, Biff, a 1973 graduate of Healdton High School, had graduated from Southwestern Oklahoma University Pharmacy School in Weatherford, and was working for Eck Drug in Healdton. That same summer, he attended church camp at Camp Pettijohn Springs, in Madill, Oklahoma and met Valarie Morris. Valarie “Val” had just completed her first year of college at Oklahoma Christian College in Edmond. Val was a 1977 graduate of Waurika High School. Biff and Val were married in 1979 and began married life as residents of Healdton.

Floyd Zimmerman who owned City Drug in Waurika, called Biff in November of 1984 to see if he would cover for him during a trip he was taking. This brought Biff to work in Val’s hometown for what was supposed to be a couple of days, but Floyd was snowed in and Biff worked for a few more days than expected. Floyd decided to sell City Drug in 1985. Biff and Val purchased the store in October of 1985 and have owned Eck Drug & Gift 34 years this month.

Val was familiar with the Drug Stores because she had worked in the soda fountain at Brown Drug Store in high school. In fact, Biff’s sister-in-law (who is also a Pharmacist) had worked for Brown Drug. When Val was still in High School and Biff was in college, he drove to Waurika with his sister-in-law so she could show off her new baby to George and Mary Ruth Brown, owners of Brown Drug. Biff said he asked, “Who is that girl.” It was Valarie Morris. “She was too young then,” Biff said. Their meeting at Camp Pettijohn Springs was not his first glimpse of his future wife. As a young driver, Val enjoyed getting to drive Mary Ruth’s Buick and make deliveries on occasion. “Working for George and Mary Ruth was fun,” Val said.

Biff and Valarie have three children, Jacob, David and Danielle. All three are WHS graduates.

Biff and Val had three young children when she commuted to Ardmore and Lawton to complete her undergraduate degree . To complete her Pharmacy degree, She lived in Weatherford and commuted home on weekends from 1988 to 1992 .

In the spring of 2014, the Eck Family was awarded the first ever Heritage Award from Southwestern University School of Pharmacy. Members of the Eck Family receiving the honor, all SWOSU pharmacy graduates, were Kenneth Eck (1950), father; Dana “Biff” (1978), son; Mark (1974), son; Sandi (1974), daughter-in-law, wife of Mark; and Valarie (1992). Biff and Val’s daughter, Danielle, is also a Pharmacist.

Valarie began her career on the retail side both in Eck Drug and also doing relief work when other Pharmacists needed to be away from their stores. She did relief work all across Oklahoma and enjoyed the work.

“I really had no interest in the Clinical side until I filled in for a year at the Veterans Center in Lawton,” Val said. “The team there encouraged me to apply for a full-time opening. I did and worked there for 12 years.” During that time, she completed a certification program and became a Certified Geriatric Pharmacist. At that time, there were only 20 in the State of Oklahoma. Val continues to maintain the extra education required to maintain this certification.

The Oklahoma Department of Veterans Affairs over saw the seven Veterans Centers in the State of Oklahoma. Each center had three to four full time providers and a fully staffed laboratory, X-ray, pharmacy and physical therapy. In this setting, residents that entered the facility sometimes with failing health and even expecting they might die soon, flourished. “With a full-time medical team, dietary team, nursing team, exercise program, and social activities, resident’s health, quality of life and longevity almost always exceeded the patient’s expectations and that of their families,” Val explained. “It was very rewarding to be part of an inter-disciplinary care team and to be part of serving our veterans.”

“One of my favorite veterans was my father-in-law, Kenneth Eck. I was part of his care team for seven years . He was very proud of his service in the Navy,” Val stated.

“While working for the Department of Veterans Affairs, I grew in confidence in my career. I met and worked with many great people and served two terms on the inter-disciplinary Peer Review team. It was a sharing and learning experience,” Val stated. “Another honor I was able to participate in was the Oklahoma Honor Flight Program. Sponsors paid their way to go as a companion to one of the Veterans on a one-day trip to Washington, D.C.”

“My Veteran, like many others, was in a wheel chair. It was a rewarding and emotional experience. An unexpected meeting took place at the Tomb of the Unknown Soldier, as several hundred school age children visited at the same time as several hundred Veterans. The joy in the Veterans eyes and the respect from the children was very moving. Waurika’s own Jack Tripp was on that trip. He was accompanied by his daughter, Terri,” Val said.

Biff and Val have experienced many changes in running a local pharmacy. “Insurance has certainly changed, Pharmacy Benefit Managers (PBM’s) have so much more control. They decide what drugs the patient gets and control the market,” Biff explained. “Another big change is the change in Oklahoma Law that Pharmacists no longer have to be the majority owner of the Pharmacy or have the controlling interest in the store. That change led the way for the big box stores like Walgreens, Walmart and CVS to have pharmacies.”

On Nov. 1, 2019 in Oklahoma the Patient’s Rights Act will take effect. This means that PBM’s cannot force mail order or a particular store or brand and can’t penalize the patient for using their preferred pharmacy. This means that those patients who prefer their small-town, independent pharmacies can still use them.”

When Biff and Val purchased City Drug in 1985, coffee was a quarter and it’s still a quarter today. All fountain drinks are the same as they were in 1985, too. “We kept the old prices because our fountain customers are like our extended family,” Biff and Val agreed. “We raised our kids here. For years, the morning coffee drinkers called Danielle, ‘Charlie.’ I think she thought that was part of her name,” Val laughed. “We are very much the old-fashioned soda fountain,” Biff stated. “Our signature drink is our cherry-lime. We make our own simple syrup and squeeze fresh limes. We still use the same formula that my Dad, Kenneth, did when he was soda jerking in Healdton at the age of 15.” Their employees are also much like family. “We are fortunate to have very low turnover.,” Biff said.

Val’s Mother, Sue Morris, started working at Eck Drug on May 1, 1989 and retired in September of 2018. “She worked here for 28 years,” Val commented. “She and my Dad were also a major reason that I could go back to school and have the career that I’ve enjoyed. They kept our kids so I could get my Pharmacy degree. I have wonderful parents. My brother, Kerry, was also a big help during this time. He only stayed for a few years, but is probably most remembered for decorating the store for holidays.”

Biff has been active in the Chamber of Commerce for many years and was a City Commissioner for 15 years, serving as mayor for nine of those years.

When asked about shopping local, both agreed that it’s wonderful to be able to support all the school projects and sports teams. “When you shop at home,” Biff said, “Your money stays at home and goes back into the community in so many ways.” 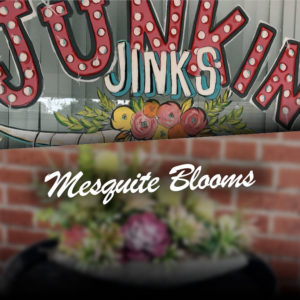 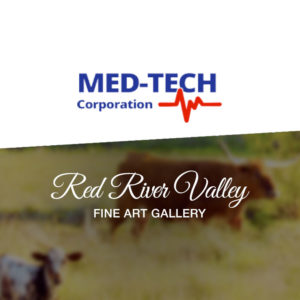 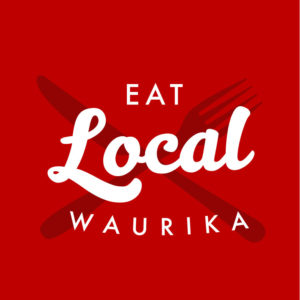 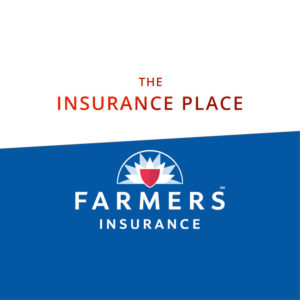 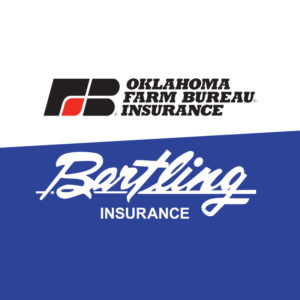 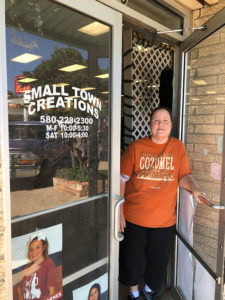 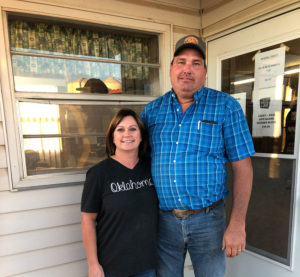 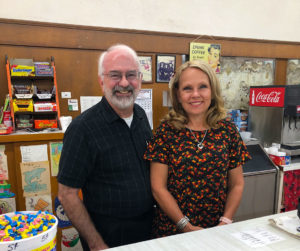 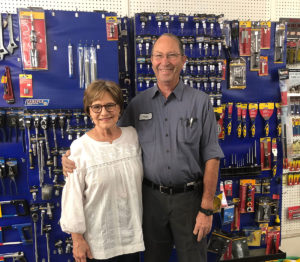 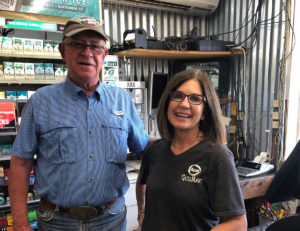 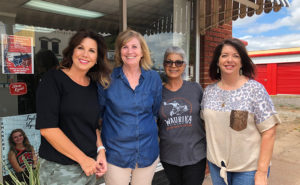 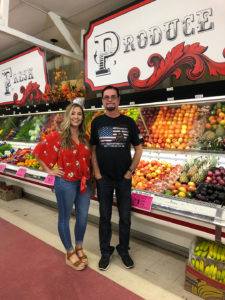 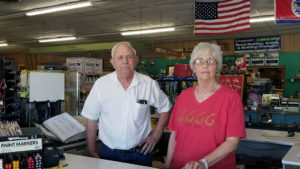